When it comes to Jennifer Lawrence’s night at the Oscars, this GIF pretty much covers it.

The Best Actress winner was the silver lining of last night’s Academy Awards: delivering plenty of GIF-worthy hijinks, flippant quotes and, of course, the wipeout seen ‘round the world, Lawrence provided much-needed charisma to a still better-than-average telecast.

The J-Law (jury’s still out on this moniker, but hey, it’s catchy) Oscar Comedy Tour began on the red carpet, where the actress lamented the sad lack of an all-you-can-eat buffet in the otherwise decked-out Dolby Theatre (“Is there food here?! Sorry, I’m so obsessed with food,” she exclaimed to Ryan Seacrest) and jokingly feigned ignorance at fashion reporters when they asked about the Dior Haute Couture “pieces” she was wearing (“What do you mean? This is the top...and this is the bottom”).

Once inside the theater, Lawrence settled down, got ready for her close-up and proceeded to nail one hilarious reaction shot after another, including the one above in response to MacFarlane’s groan-inducing “We Saw Your Boobs” song. The cheeky fist pump came in response to the line, “We haven’t seen Jennifer Lawrence’s boobs at all!” I foresee an uptick in straight male viewers next year, hoping for an updated version.

And if all eyes in the room weren’t already on her as she took to the stage to accept her statue for Best Actress, Lawrence promptly ate it on the steps, and carried on none-the-wiser when a gallant Hugh Jackman rushed to her aid then returned slightly dejected to his seat. Laughing off the fall, Lawrence jibed, “This is nuts!” before shouting out her fellow nominees and the cast of Silver Linings Playbook in a that familiarly off-kilter and refreshingly sincere way she's now famous for.

Things really picked up speed after Lawrence left the stage. She reacted to a hilariously creepy “I’ll be waiting!” first encounter with Jack Nicholson, “took a shot” before responding to journalists’ questions and flipped off a crowd member in the press room, only to respond with horror when photographers assumed the gesture was for them. After a quick costume change, she was off to the Vanity Fair afterparty, where J-Law-sponsored hilarity undoubtedly ensued off-camera.

While I’d switch bodies with Jennifer in a heartbeat, I hardly envy the monumental hangover she’s undoubtedly enduring as I write this. Hopefully it won’t set her back on her next much-anticipated venture: Oscar Host 2014. Hey, a girl can dream. 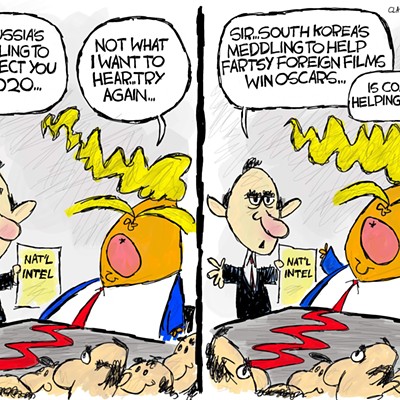