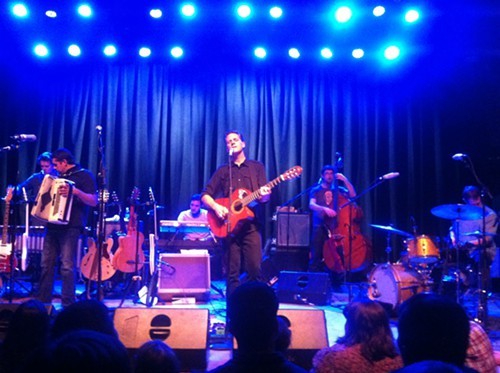 My travels in the Pacific Northwest last week happened to coincide with a couple of Calexico shows, so I got a preview of what’s on tap at the concert at the Rialto Theatre this Friday, Oct. 26.

Here’s my takeaway: If you’re a fan of Calexico, you need to get your ass to Friday’s show.

Sure, you may have seen a lot of Calexico over the last few years, what with their concerts in conjunction with the All Soul’s Procession, the Festival en el Barrio and the other one-off performances they’ve been doing here and there.

But the show that Calexico is bringing to town tomorrow features a lot of songs from the new album Algiers. While there are plenty of old warhorses mixed in—“Across the Wire,” “Crystal Frontier,” “Guero Canelo” and more—the Calexico concert experience has been refreshed and rejuvenated with the new material.

Both at Seattle's Neptune Theater and Portland's Aladdin Theater, Calexico opened with “Epic,” the song that also opens Algiers. And new tunes like “Splitter,” “Sinner in the Sea” and the show-closing “Puerto” simply explode as rock anthems when they’re played live.

The touring band has set up John Convertino’s drums at the front of the stage, so his expert craftsmanship is on display alongside Joey Burns’ guitar work. Tucson’s Jacob Valenzuela and Germany’s Martin Wenk continue to mix and match with trumpets, vibes, accordion and whatever else happens to be onstage. Sergio Mendoza is the master of the keyboards, newcomer Ryan Alfred is handling the bass and Spain’s Jairo Zavala is lighting it up on electric guitar. The chemistry works—you can see it in the smiles on their faces as they play each concert.

I’m sure we can expect plenty of special guests to join them here in Tucson. On the road, I saw some astounding collaborations: In Seattle, Devotchka came out to join them on “Corona” (as well as “Para,” from Algiers), which was an unforgettable encore. In Portland, Steve Berlin of Los Lobos came out to play saxophone with the band on “Splitter” and Luzelena Mendoza of Y La Bamba provided vocals for “He Lays In The Reins.” At both shows, Portland’s Laura Gibson joined Burns for a haunting duet of Leonard Cohen’s “Waiting for the Miracle.”

My advice: If you like Calexico, you’re gonna love this show. The Dodos open.

It all starts at 8 p.m. at downtown’s Rialto Theatre. Tickets are $22 today and $24 tomorrow, unless you want to spend an extra 10 bucks on balcony seats. You’ll find the details here.

(Of course, if you're in the Phoenix area, you'll have a chance to see them Saturday and Sunday nights at the Crescent Ballroom. Details here.)

An NYPD Cop Has Been Arrested, Accused of Plotting To Cook And Eat People