From Far, Far Out There in Phoenix: Vernon Parker Says Kyrsten Sinema Is A Pagan Hippie

This video, from the CD 9 race in Maricopa County, is one of the weirdest campaign ads I've ever seen; it's second only to the wacky "Demon Sheep" from Californian Carly Fiorina's failed 2010 US Senate campaign in abject strangeness.

CD 9 candidate Republican Vernon Parker's campaign went to a strange, LSD-tinged place with this ad, photoshopping his opponent, Kyrsten Sinema, as a dirty, paganistic, anti-American hippie. Check it out below.

The Phoenix New Times has a few things to say about it, of course:

From this ad, we can conclude that his Democratic opponent, Kyrsten Sinema, is running on flower power, she doesn't like war, and toward the end of the ad, it's said that Sinema has "promoted hatred" toward the U.S. of A.

"And perhaps the weirdest of all, Sinema participated in Pagan rituals, singing and spiraling during an anti-war protest," the non-hippie narrator says in the ad.

If you watch cable television in the area, you've probably seen the similar ad from a pro-Parker political-action committee, which is set in outer space.

Like that ad, and most political ads, really, there are a few misleading things about the hippie ad.

[NOTE: The headline and story were edited to fix a misspelled name.] 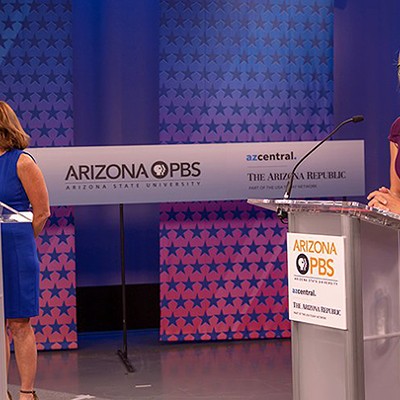