I remember standing in the kitchen of HUB Restaurant and Ice Creamery at 266 E. Congress St. one morning as owner Kade Mislinski explained why he bought the massive ice cream machine in front of us. He knew the entire history of the machine - apparently it was the first ice cream mixer to take the mixing drum and turn it on its side, like a front-loading washing machine - and what it was capable of, which has turned out to be quite amazing.

By amazing, I mean profitable. Not much later I spoke to Mislinski again and he said he was selling hundreds of thousands of dollars worth of ice cream. That's pretty amazing. Then again, so is the ice cream at HUB, which many of us have become somewhat addicted to.

That's the same ice cream that Mislinski will be tossing into a mixer with other ingredients to create the signature shakes at Lulu's Shake Shoppe. Any takers? See you Saturday.

Claytoon of the Day: Shake It For Trump 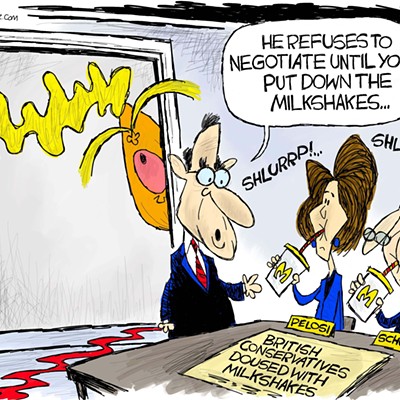 Ice Cream Festival to Take Over Rillito Park This Weekend