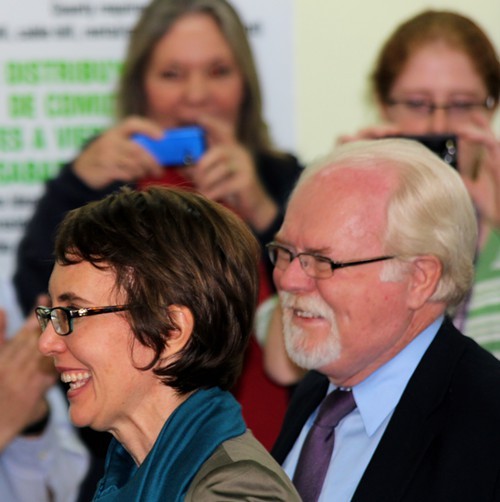 Gabby Giffords will make a special appearance on behalf of Democrat Ron Barber at a get-out-the-vote concert at downtown’s Rialto Theatre next Saturday, June 9.

Giffords, who stepped down from Congress in January to focus on her recovery from a gunshot wound to the head during a shooting rampage that left six dead and 13 wounded, asked Barber to run for the remainder of her congressional term.

Barber, who is facing Republican Jesse Kelly in the June 12 special election, was Giffords’ district director. He was among those wounded on Jan. 8, 2011, taking bullets in his leg and face.

The concert, a free show designed to reward volunteers and generate voter enthusiasm leading up the June 12 special election, will feature Sergio Mendoza y La Orkesta, along with a special appearance from Joey Burns and Jacob Valenzuela of Calexico, which is one of Giffords’ favorite bands.

It will be Giffords’ first public appearance in Tucson since she stepped down on Jan. 25.

More on the race between Barber and Kelly here.

Young People in America are Dumb? No Kidding

Something to Think About Before Public Pool Season