I Wish I Could Win Some Badges The Girl Scouts have revamped their badge system for the first time in twenty-five years and they've made an effort, seemingly to provide more real world skill sets to the program (and stuff related to cookie sales, obviously):

There are badges that haven't changed much — in a press release, the organization calls the Cook, Athlete and Naturalist badges "as relevant today as they were in 1912." But Digital Movie Maker? Website Designer? Geocacher? Locavore? Yes, the times they are a-changing. (Try not to panic at the thought that a Brownie — she'll be somewhere between 6 and 9 years old — can earn a badge called "Computer Expert.")

Some of the changes aren't entirely about changing the subject matter; they're about adjusting the approach. For example, what used to be a Fashion, Fitness and Makeup badge has been changed, because Niehaus says that while the girls in the program are still interested in makeup and fashion, that interest isn't limited to how things will look, but goes a little deeper. So there will be a badge in the Science & Technology category called The Science Of Style, which will focus on things like the chemistry of sunscreen or perhaps even making your own perfume.

That's all pretty cool, but I think I might try to earn my own Science Of Happiness badge (since it's a little too late for me on the Good Credit one):


Developed with help from a psychology researcher, it calls on girls to work for one month on a strategy generally believed to increase personal happiness — Niehaus suggests, for instance, being forgiving towards others — and then evaluating its effects on their psychological well-being.

Way to go, Girl Scouts. We could all use a little extra personal happiness.

Not Many Tickets Left for the Santa Cruz Heritage Dinner

The Home Den Is Reopening 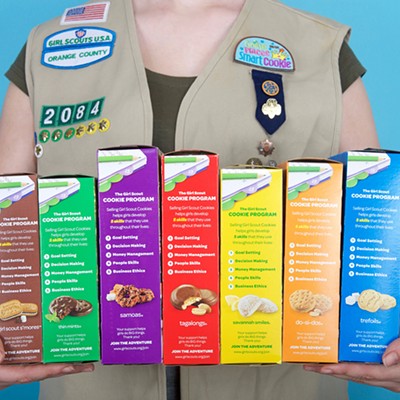 Let's Listen to the New Calexico and Iron & Wine Record

Girl Scouts: Here's a Sure Sale for Your Cookies!