RIP Gracie: When Ugly Things Happen to Beautiful Tucsonans (and Their Dog)

Crawling away to hide is not an option — at least not for Tucsonan Rodney F. White. He refuses to give up even though his house burned down and he lost much of what he owned. Even though the fire killed his best friend Gracie.

Gracie was a dog, but no ordinary pooch. She was one of those special animals filled with enough spirit and love to even make a woman suffering from Alzheimer’s become playful and lucid when Gracie came to visit.

White, a lifelong photographer and longtime Mesquite Valley Growers employee, got the phone call Sunday morning while he was at work. He was told the cozy home he’s been renting for the past 11 years was on fire with a heat so intense that it blew out all the windows. “It’s bad,” the property manager told him over the phone.

“What about Gracie?” Rodney asked.

When he rushed back to the midtown abode, the place was still smoldering. Gracie’s body was wrapped in one of his work shirts and placed beneath a mesquite tree. Rodney pulled out the camera he had on him and began to take photos of the fiery wreckage.

“People are looking at me with my camera,” he said. “I told them it was my house and this is what I do.” He’s been hooked on photography since he received a camera for Christmas when he was about 9. The new camera he just bought was destroyed in the fire, as was the original camera that kicked off his passion some 50 years hence.

All of his electronics melted from the heat, but he’s hoping he can salvage his computer’s hard drive to retrieve the photos he recently took for a friend’s wedding. And the hundreds of photos of Gracie.

He’d take photos of the pooch every night since they first met on July 3, 2010, at a rescue group adoption event at PetSmart. Although Rodney’s friend had been urging him to get a new dog for some time, and even sent a photo of the dog she set aside for Rodney, the photo was not detailed enough for him to determine the breed. The first thing he thought when he saw Gracie in person was, “Oh God, it’s a Chihuahua.”

When he picked her up and they looked into each other’s eyes, however, any Chihuahua-doubt fizzled. Their relationship was cemented when he put on her on a leash and walked her around the store.

“Every woman in the store stops me, says ‘I love your dog, she’s so cute,’” Rodney recalled. “That’s it. I’ll take her. If nothing else, the dog is a chick magnet.”

He soon found out she was so much more. On the first evening at Rodney’s house, Gracie suddenly put her front paws above her head as if in prayer and stood up and began to dance on her hind legs. “I nearly fell off my armchair I was laughing so hard.” She would perform that same dance every time she’d meet someone new, exhibiting excitement at simply being alive. For Rodney, it was the pick-up he needed during a down time in his life.

“I was spending so much time along, not happy with my station in life,” he remembered. “I’m a strong believer in love. I like being in love and having love. And that’s what that dog gave me. And hell, it’s so much better than being in a relationship with a human.”

Gracie flexed her creativity on Rodney’s Facebook page, with posts about how she had redone his house like a Degas mural while he was at work. Rodney also shared her penchant for being photographed in black and white after watching and being impressed with film noir movies. “‘I’ll do my best Rita Hayworth for you,’ she told me.”

“I created a persona for her,” Rodney explained, “a persona that touched many.” Gracie’s Facebook posts and photos never lacked comments — with the photo of Rodney and Gracie at their first meeting receiving a supreme compliment. “My friend says it shows the true beauty of inter-species love.”

Rodney surmises she died from smoke inhalation, not the flames, and, based on the hour of fire, she may have died peacefully in her sleep. And just because Gracie’s gone from this particular plane, doesn’t mean she’s not out on her next mission bringing joy to everyone she meets, Rodney explained.

Gracie is further immortalized by Donna and Rachel Van Nostrand, the former who is the friend who matched up Gracie and Rodney at the adoption, on their webpage: For the Love of Gracie.

For Rodney, keeping on and keeping positive is the only option. He did the same thing when he lost everything in the 1983 Marana flood. “I was pulled off my rooftop by a helicopter. I started over then, and I’ll start over now.” He won’t rant, rave or seethe, but instead was already making jokes.

“I don’t want to be one of those miserable people,” he says. He wants to instead be a living example of the grand yet simple lesson he learned from Gracie: “Walk with spirit and kindness. That’s it. Gracie was my muse.”
__
Ryn Gargulinski, aka Rynski, is a writer, artist, performer and poet. Her column runs in the “Tucson Weekly” print edition monthly and weekly on Friday on “The Range.” See more writing and art from RYNdustries at ryngargulinski.com and rynski.etsy.com.

Planned Parenthood Cuts Abortion Services Outside of Tucson and Phoenix 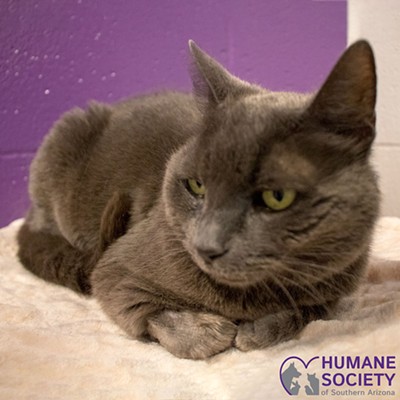