Update: Yogi has been adopted! But don't cry, friend; there are many more animals at the HSSAZ that would love a home.

Yogi, a 6-year-old Labrador Retriever mix, is a gentlemanly fellow with a lot of loyalty to give.

Poor Yogi can’t tell us what he’s experienced in the past, but he’s doing everything he can to show how much he wants to be somebody’s best friend. Found as a tired and lonely stray and brought to the Humane Society, Yogi was eventually adopted but then returned within a few days for being a little too interested in the cat. Apparently Yogi thought chase-the-kitty was a great game but his feline sibling thought otherwise! Now this endearing old gentleman needs another chance after, once again, waiting for many, many weeks to catch someone’s eye and heart. Yogi suffers from mild arthritis and would benefit from some weight loss. But it’s nothing a little moderate exercise, regular vet care and tough love can’t fix! After food, Yogi’s favorite thing in the whole world is a good back scratch. Both of his legs will kick wildly when you itch along his spine - resulting in a funny tap dance, a huge grin and grunts of sheer joy. Why not offer this boy a reason to smile today? Yogi has been waiting since May to meet you and is eager to offer up his unconditional love and loyalty to the right lucky person.

Here's a video of Yogi showing off his cute mug.

Come meet Yogi! He's currently living at the Humane Society of Southern Arizona, 3450 N. Kelvin Blvd. The Humane Society is open Monday through Saturday from 11 a.m. to 6 p.m., and on Sunday from noon to 5 p.m. The phone number is 327-6088.

Our Weekly View From Mars 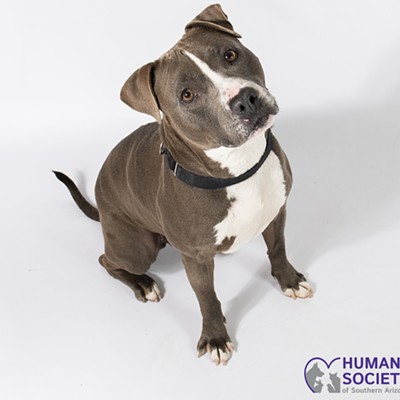