Starbucks Provides an Example of How to Respond to Controversy

You might have seen a blog entry working its way around the internet in which a customer of a New York Starbucks claims to have witnessed an employee in the process of being fired for his sexual orientation:


The event got more horrific, when he, who had kept his composure through the entire incident, not once raising his voice despite being attacked, got up from the table to go to the bathroom to cry in private.

Then the three women turned on him like Vultures.

“I’m done. I’m done. Nobody wants to hear it anymore. I don’t care who he is dating. I don’t want to hear about it.”

“He should not get upset at the things people say to him. He should be used to it. It’s not like he turned gay yesterday.”

“I used to listen to it, now I’m just sick of hearing about it.”

“Nobody does, but it’s over now. You won’t have to hear about it anymore.”

While it doesn't appear that the original blogger has any reason to make up a story like that, it's sort of impossible to say immediately whether any first-person account on the internet is true these days. However, that doesn't stop the spread of the blog (or a second-hand account of the story) to spread rapidly around the world, thanks to social media. Say what you will about Starbucks, but they did make a valiant attempt to stay ahead of the rumor mill.

Whoever is running their Twitter feed has also been proactive in responding to people tweeting about the story, just letting them know what their corporate commitment is, and that they were investigating the incident. Maybe it's just Starbucks trying to preserve their image, but this is an example of how a company can at least try to use social media in a pro-active way without coming off jerkier in the process.

Images and Stories From the Wallow Fire 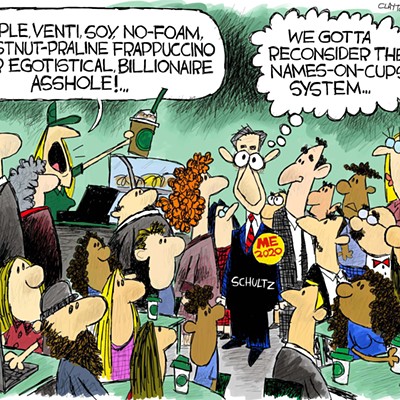 Finally, We Learn Why Starbucks Baristas Always Screw Up Your Name