The Truth Is Out There: Was Roswell a Russian Attack Aimed at Creating Mass Panic? And Were Nazis Involved? 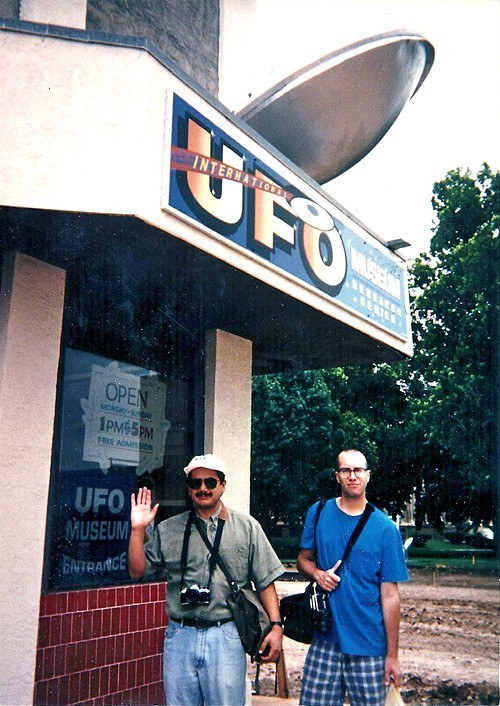 I teamed up with photographers Hector Acuña and Tim Archibald to spend some time with the UFO community back in the mid-’90s, including a fact-finding mission to Roswell for the first big celebration of the anniversary of the ’47 saucer crash. I had a lot of fun, but I gotta say that I walked away more skeptical than I started out.

There's a new theory about what happened at Roswell when the reports about the flying disc hit the local paper:

A new book on that mysterious government site in the Nevada desert called Area 51 claims there was no alien spacecraft that crashed in Roswell, New Mexico in 1947 but there was a crash of a disc like object there, there were strange looking bodies and the government did cover it up.

Oh. And former Russian dictator Joseph Stalin maybe had a hand in it.

According to Annie Jacobsen, the reporter and contributing editor to the Los Angeles Times on national security matters who authored "Area 51," the “spaceship” that crashed at Roswell was actually a Soviet spy plane that came down during a storm.

Jacobsen says an impeccable source she worked with for 18 months while writing the book — a former engineer at Area 51 who saw the wreckage and the bodies - claims it was filled with bizarre looking, possibly genetically engineered and/or surgically altered child-sized pilots that were designed give the appearance of aliens — small bodied creatures with big heads and large eyes.

And what was behind the crash? Then Soviet leader Joseph Stalin was hoping, Jacobsen writes, that the news of a disc like UFO flying around in the sky would cause widespread panic in the U.S., as did the Orson Welles’ 1938 radio broadcast “War Of The Worlds.”

Stalin was said to be fascinated over how the broadcast caused panic among some Americans who actually believed the nation was under attack by aliens from outer space.

And it gets weirder. Those alien looking bodies were said to be scientific experiments created by the "Angel of Death," Nazi doctor Josef Mengele, for the USSR after the war.

Note to the Naive: News From "The Onion" Isn't Real

The Only Rapture-Related Song Worth Noting