Ron Barber, Tucson District Director for Rep. Giffords, was among the wounded from Saturday's shooting. Giffords spokesman C.J. Karamargin shared with us two photos from his room in the ICU.

Karamargin: "Ron Barber, 65, meets with Daniel Hernandez in his hospital ICU room on Sunday, Jan 9, 2001. Daniel works with Barber as an intern for Congresswoman Giffords while Barber is the District Director for Giffords. Hernandez rushed to Gifford's aid after she was shot. While holding the wounded Giffords, Hernandez said he asked another bystander to put pressure on Barbers wounds. He also asked Barber for his wife's phone number and then shouted it out to someone so that Barber's wife, Nancy, could be informed of the shooting. Barber was extreamly greatful and impressed with Hernandez's composure under the circumstances and had been asking to see him after he had gained strength following surgery."

Karamargin: "Ron Barber, 65, reacts after opening a gift from his granddaughter while in the ICU at University Medical Center on Monday, January 10, 2011. Barber was able to visit with his four grandchildren two days after being shot twice during the attempt on Congresswoman Giffords' life in Tucson." 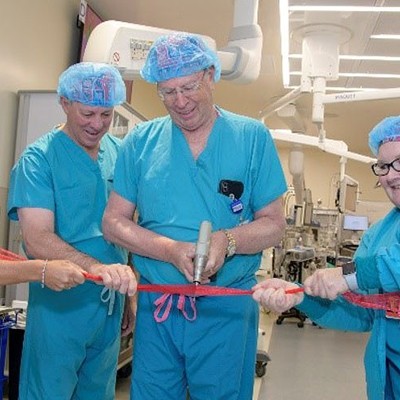