The Stake in the Desk

From a rich past comes a haunting present—or at least that’s what the shopkeepers tell me. The structure that is now Old Town Artisans has passed through many hands since its historic beginnings as a Spanish fort. Now it's an artisan’s marketplace.

Different sources remember the history differently. One fact remains irrefutable though; the building was once part of a Spanish fort called El Presidio San Agustin del Tucson, and it was built in 1775. The Tucson Tourism Update, a quarterly newsletter, says the adobe structure that remains today was built in 1850.

In 1888 the land fell into the hands of liquor salesman Julius Goldbaum, who used it for

his business, according to the Tucson Tourism Update.

Jef Moore, the current manager of Old Town Artisans, said that some of his bottles were even found during further construction on the land.

The construction of the land and the different people who owned the place become a little hazy at this point. Many businesses took over, and sources have difficulty keeping them straight.

Moore mentioned that the variety of businesses on the land increased over time.

“When it became Old Town, we had a parking lot, we had a gas station, we had all these things that have so much history,” he says.

Storytelling is quickly becoming part of the history of Old Town Artisans. When I first came to research Old Town Artisans and the influence it had on the community, I spoke with Moore who quickly referred me to shop owner and resident storyteller, Eddie Gallego.

Gallego is the resident ghost whisperer of Old Town Artisans. He knows many stories of employees hearing and interacting with the ghosts.

“I was talking to an employee on the south wing. She was facing me over a counter and we were having a conversation and all of a sudden she jumped up and looked around. I looked at her and I go ‘What’s wrong’ and she goes ‘Somebody pinched me’ and I’m going ‘Nobody’s back there.’ … She actually ran down the hallway and went all around and there was nobody in the place.”

This is only a sampling of the stories that Gallego has to offer. He said that different ghosts have ranged from cowboys to little girls.

“When you have been hanging around here a while, weird things happen,” says Mary Anne Anderson, Gallego’s employee whom he’s known for 20 years.

No one wants to take a guess at whether the ghosts remain from the days of the presidio, but Moore suggests that there are “spirits.”

“The history of Old Town Artisans is based on all of the spirits that keep it alive,” he says. “There are things that go on here. I believe that there are some really good spirits that keep us alive… How weird is that?”

This project was originally written and put together for JOUR 406: Magazine Photography class during Presession. 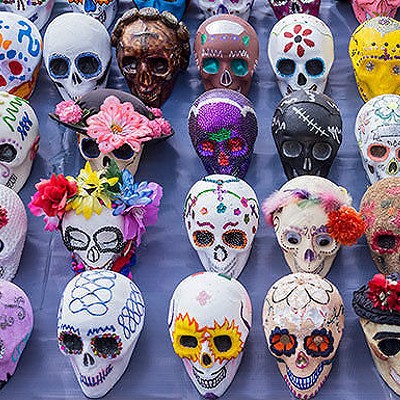