Rock The Council: Save The Rialto! 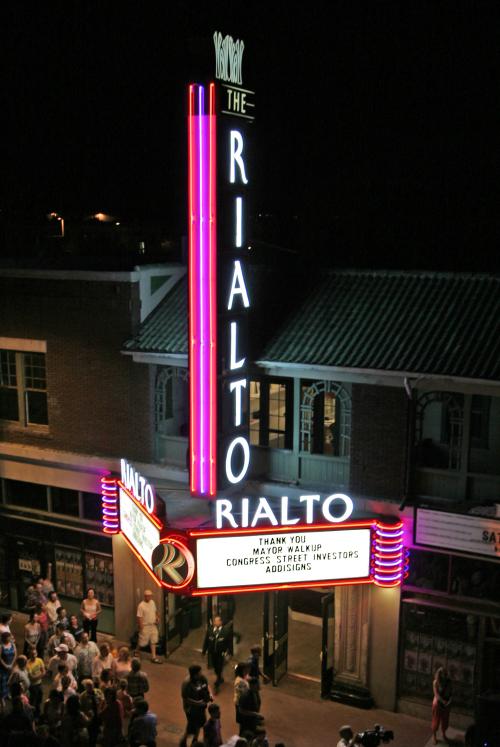 Ladies and gentlemen: It is time to rock the Tucson City Council.

If the council does not act this Tuesday, July 7, to save the Rialto Theatre from the developers who are taking the first steps to driving it out of business, then the theatre could be facing the final curtain.

We here at the Tucson Weekly say this cannot be allowed to happen.

In the last week, developers Scott Stiteler and Don Martin have made it abundantly clear that they do not care about the future of the Rialto Theatre, which is one of the few elements of Rio Nuevo that can be called a success. They’ve informed the Rialto Foundation that they plan to evict the non-profit organization from space surrounding the city-owned theatre that the foundation has been using as a green room for performers and as an administrative office and storage space.

You can find the details of how we’ve gotten to this sorry state of affairs here, but the bottom line is this: Martin and Stiteler are furious with the Rialto Foundation because attorneys for the foundation stood up and protested a deal that would have delivered $4 million in property and control of much of the eastern end of downtown to Martin and Stiteler. The council asked for another two weeks to examine the deal; the developers, in turn, walked away and are now intent on destroying the Rialto.

Councilman Steve Leal has stepped up and asked the City Council to consider condemning the property that the Rialto needs to continue operating. Why should the city step in? Because the city owns the theatre and the council needs to protect its asset. And besides that, the Rialto has proven itself to be the economic engine of the downtown arts and entertainment district. Over the last four years, it has brought hundreds of thousands of people downtown for hundreds of shows.

We do not casually advise the City Council to use the power of eminent domain, but in this case, we see no other choice. The Rialto stands out as the success story of downtown redevelopment. We cannot allow a pair of greedheaded developers to destroy it.

What can you do? Contact the mayor and council offices to let them know you support the Rialto Theatre. After you’ve done that, show up at the City Council meeting at 2 p.m. this Tuesday, July 7.

We must win this fight. And it is your voice that will make the difference.

Say it with me: Save the Rialto!