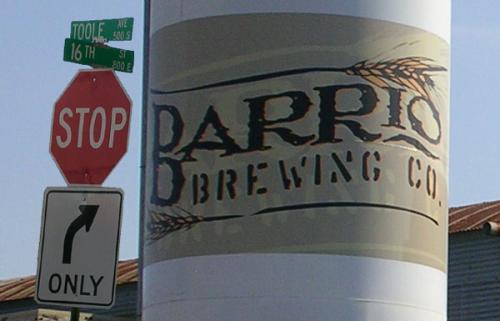 Train whistles used to conjure up thoughts of hobos, traffic delays and old Johnny Cash records, but that was before I discovered “rail pints” on a recent visit to Barrio Brewing Company (800 E. 16th St.).

You see, Barrio Brewing Company is housed in this super old and very cool warehouse building that happens to be a stone's throw from a set of railroad tracks and its associated crossing. And every so often, the train comes blaring through, shaking tables and deafening anyone sitting at the dozen or so patio tables.

But Barrio has turned what could be a nightmare for many businesses into a bright spot. If you’re at the brewery when the train comes crashing through, you get a pint of their very tasty beer for $3 for as long as the road blocks are down across the nearby tracks.

On my visit, the waitress came crashing through the brewery doors, exclaiming "Rail pints!" to all that would listen. It was festive and fun, and before I knew it, I was half way through another pint and the sound of the train seemed somehow less important.

Good job, Barrio. Waiting for a train to pass has never been so much fun.