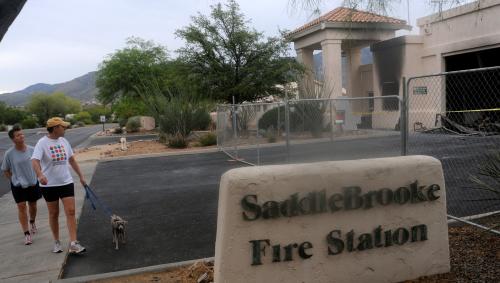 This just in, from the good folks up in Saddlebrooke:

At approximately 12:43AM this morning the Captain at Saddlebrooke Fire Station 373 was awakened by a popping sound coming from outside his bunk room. He opened his door to investigate and found the communications room at the front of the station fully involved in fire. Before he did anything else he alerted the rest of his crew at the other end of the station where they slept. The crew proceeded to the bay and the engines to prepare to fight the fire, and found the bay was also heavily involved in flame. There was insulation and debris falling on to the fire trucks and beginning to burn the hose and equipment on the truck. The crew quickly decided they needed to get the trucks out of the bay before any other efforts could take place. The fire had caused the power doors to fail and the engines had to be backed out of the rear of the station. It was then that the Dispatchers were alerted of the fire and additional Golder Ranch engines and equipment responded to the fire.

Additional units arrived within about seven minutes at which time the building was approximately 25% involved. Once firefighting operations were underway the fire was contained and under control in just over 30 minutes. There was extensive damage to the front of the building and bays, and the entire structure suffered smoke damage. The station will need extensive renovation to render it habitable again.

All crew members who had been asleep in the station got out safely and did not suffer any injuries throughout the ordeal. The quick thinking of the Captain to first alert his crew to safety was critical to the outcome of the event. The engines and other equipment had minor damage and will be returned to service as soon as the fire district mechanics release them.

The cause of the fire is under investigation at this time.

It should also be noted that Mr. Ed Robson of SaddleBrooke Development has offered 3 Villas for the crews to base out of so that there will be no loss of service and response time to the SaddleBrooke Community.

Temporary Station 373 will be located in the HOA #2 Villas near Holiday and Casual.

Martian Snapshots of the Week