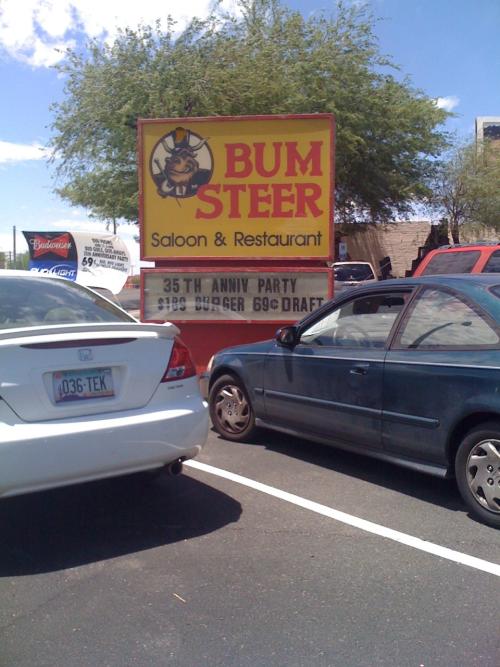 Remember the Bum Steer? Honestly, I thought it was still closed.

I know I'm not the only one who was more than a little surprised to see the posting on StarNet's home page today: "Original 1974 menu prices at Tucson's Bum Steer today."

Basically, this Tucson institution of our youth (Anybody else with me on fuzzy White Wednesday memories in college?), is celebrating its 35th anniversary by offering a half pound burger and fries for $1.89—along with other ridiculously low menu items like an 8 ounce sirloin steak for $4.99—until 11 tonight for two cans of food for the Community Food Bank.

That was all I needed: I talked my East Coast co-worker into stopping by Safeway and heading down for lunch.

I was rewarded with a trip in the Wayback Machine and a fairly decent burger.

When we got there around noon today, the parking lot was completely packed, and a KVOA-TV 4 truck was parked by the entrance. Inside, the overwhelmed host and hostess were busy filling Community Food Bank boxes with diners' canned foods.

"It's going to be 30 minutes," the young hostess informed us.

"Good for you," I responded. Regardless of its past history, the Bum Steer is just one of those funky, historic Tucson places you just want to see succeed with the right management.

The wait was much shorter, giving me just enough time to get reacquainted with those same crazy antiques, assorted junk, and vintage signs hanging on the walls and from the ceiling that I used to know so well. Bill pointed at a figure in the large covered wagon suspended over the floor.

"Is that a corpse?" he joked to the guy at the door.

"No, that's a mannequin," the guy said, in a manner that Bill later pointed out seemed to imply the corpse was somewhere else in the cacophony of stuff.

We were seated downstairs, in the bustling dining room, and I had plenty of time to annoyingly reminisce to Bill about my college adventures there with my sand volleyball crew, and the more adult Burger Madness lunches I would attend with colleagues in the 90's.

I was really hoping for that same Bum Steer burger I remembered, but when our food finally arrived (it was very busy, as I said), there was little fanfare on the plate: just a burger with a slice of American cheese (I paid extra) and a leaf of lettuce, with just a few ranch-style fries on the side.

It didn't look like much, but they didn't skimp on the half-pound of meat, and it wasn't overcooked. Give me a nice juicy burger, and I'm willing to overlook the lack of tomato, pickle and onion. The ranch fries were tasty, too.

It was also nice to see that they are playing up the Steer's crazy decorations: The guy at the door said you get a free drink if you find the oldest license plate on the wall and tell the bartender what state it's from.

Maybe that license plate is in this ceiling tour video I shot as we were leaving:

Martian Snapshots of the Week