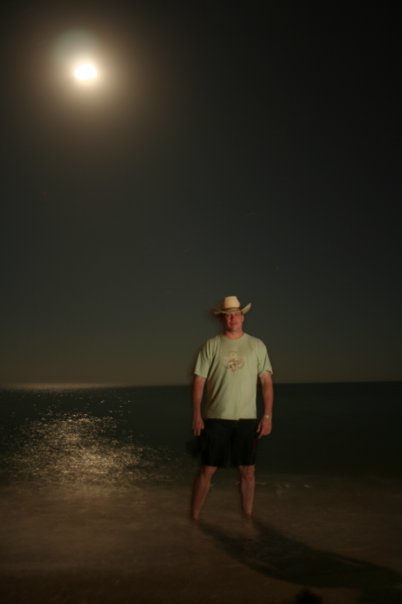 Somewhere beyond a wall of health alerts and travel warnings, there is still a Rocky Point.

It seems pretentious to call Puerto Peñasco by its given name: The dusty little seaside escape for Arizonans was long ago gringo-ized, our closest refuge to quench a summer's thirst for water and dip a toe in the ocean.

We need Rocky Point. And it needs us.

Nowhere was this more evident than when my two brothers and I rolled into town last Thursday evening to load up on carne asada, pollo, carnitas and queso tacos from our favorite street stand on the way to the luxuries of a condo on Sandy Beach.

The stand was closed, but as the only gringos in sight, we were immediately besieged by a rival taco vendor, souvenir merchants and a street hustler aggressively offering to get us "novias."

Even more than us, Rocky Point is hurting. But Tempe-based band Roger Clyne and the Peacemakers kept its promise to the little fishing village with its annual summer "Circus Mexicus" concert last Saturday night. The band has scaled back from its twice-a-year commitment (there's usually one in October, too), but gave back to Rocky Point with its customary Friday-night charity event, benefiting a local orphanage.

And, as explained by frontman Clyne halfway through the first set of a four-plus hour performance in front of a significantly smaller crowd than past years, Rocky Point gave back to the band this year. Clyne told the crowd they are used to border hassles on the Mexican side when they're bringing so much equipment into the country. This year, however, someone in local government put in a good word for them.

"Someone called them up, and told them to let these guys come on through: 'we need them down here,'" Clyne yelled to a wildly cheering crowd. "You make this possible, and we thank you for it."

There's something about the way travel warnings for a quasi-Third World country will peel away a few thousand of the more casual Circus Mexicus faithful, creating an environment that makes some of the more adventurous and romantic notions (run-ins with Mexican police, drinking the night away on a quiet Mexican beach) that Clyne likes to write about possible. (BTW, my brother Greg took the photo of me at the top of the blog posting - there's no option for photo credits in the blog tool.)

We didn't have to lie in the letters to the boys back home about the following:

* One brother had a little too much tequila Friday night, leading to a drunken visit to the beach in the middle of the night. When he attempted to return, he went to the same condo—in a different building—and ended up sleeping in front of the door when nobody answered his knocks. Had there been more people, that empty condo would probably have been rented, eliminating the fun we all had when we spent half of Saturday looking for him up and down the beach while he continued to try to get somebody to answer the door.

* The other brother took on a Mexican cop when his friend was pulled over for the slightest of spinning tires after proceeding from a full halt at a stop sign in the sand. When told they would have to follow him to the police station to "take care of it," my brother refused and suggested they settle up right there. After being told the fine would be "catorce," his rusty Spanish led him to an indignant refusal to pay "40 dollars," instead of the 14 being requested. The cop let them go with a warning. I wonder how interested the bored cop would have been in stopping them to begin with had there been a steady stream of tourist traffic into town.

* During Saturday's concert, one of the large speakers to the right of the stage shorted out, resulting in a foot-long lick of flame extending toward the audience. "Can somebody get that for me?" Clyne implored the crowd, between lyrics. Enthusiastic concertgoers quickly doused the fire with beer.

* The band was halfway through introducing a new song when a fight broke out in front of the stage. "Really?" Clyne sternly told the two men as he briefly stopped the show. "We're singing about love and you're raising fists? Settle your differences right now." The two men shook hands to the cheers of the crowd.

The show itself went deep into the night, as usual, and although it was the same sing-along fare the crowd was expecting, it was tightly and enthusiastically executed by Clyne and his band, who kept another promise to put on a great show, "whether it's in front of one or 10,000." Tucson band The Jons gave the show a mariachi authenticity, backing the Peacemakers with powerful trumpet blasts.

By the time the last drunken revelers stumbled back to their posh gringo vacation pads early Sunday morning, there was a certain authenticity to the Peacemakers' signature toast, "Here's to life!"