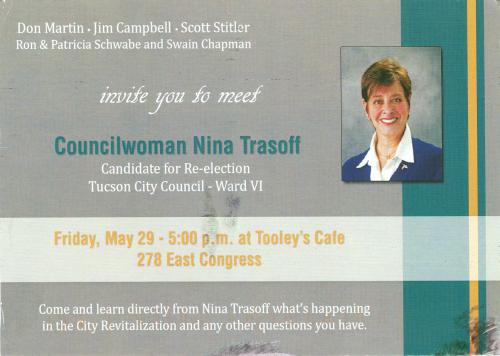 Dave Devine has reported on the proposed development agreement that's being hammered out between the city of Tucson and downtown developers Scott Stiteler and Don Martin, owner of the Rialto block. Details remain sketchy, but the big picture has Stiteler and Martin redeveloping the Rialto block, building apartments in the Toole Avenue warehouse district and making other investments. In exchange, Stiteler and Martin will be able to get their hands on anywhere from $3.5 million to $7 million in downtown property, according to various drafts of the agreement. That could include, according to a draft of the agreement, an old Volvo dealership on Broadway Boulevard east of downtown, the downtown train depot, the Ronstadt Transit Center and a property on Sixth and Toole avenues.

At the same time, developer Jim Campbell—who split from a partnership with Stitiler and Martin earlier this year—is working on his own deal with the city, which involves him building some apartments/condos/retail space on city property east of the Rialto block, with the city building a parking garage.

The developers who are negotiating these deals with the city appear quite supportive of Ward 6 City Councilwoman Nina Trasoff, who has been championing their deals. They're throwing a fundraiser for her re-election campaign tomorrow night.

Abracadabra: How Democrats Pull A $1.17 Billion Dollar Rabbit Out of Their Hat