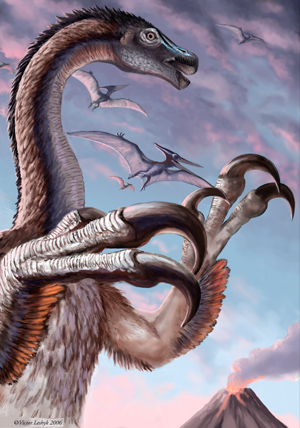 While up in the Flagstaff over the holiday weekend, I stopped by the Museum of Northern Arizona to finally see "Therizinosaur: Mystery of the Sickle-Claw Dinosaur." A few years back, fossil hunters in southern Utah stumbled across a nearly complete skeleton of a 13-foot-tall clawed and feathered dinosaur that lived 93 million years ago. This particular Therizinosaur, which shows evidence of evolution toward today's birds, somehow ended up miles out at sea before it sank beneath the Cretaceous Western Interior Seaway that then split North America. It looks like it was a mean prehistoric ostrich with long, razor-sharp claws.

The exhibit, which includes a model of the therizinosaur's skeleton, a collection of his actual bones and artistic interpretations of what the fearsome creature looked like, continues through Aug. 30. Here's more info.

The museum will have Hopi and Navajo festivals later this summer.