Opening Day for the Tucson Toros! Plus: Bad Bugs Bunny! 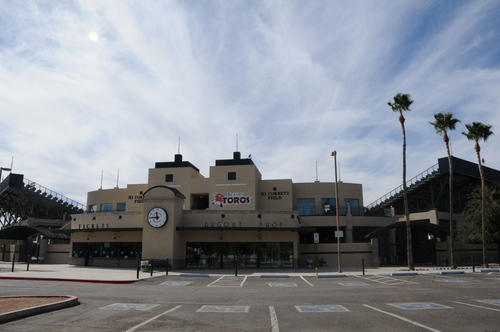 It's quite a night out there! First, provided this rain lets up by then, the Tucson Toros will be playing at Hi Corbett Field for the first time in more than a decade. Sure, it's Golden League Baseball instead of the Pacific Coast League, but who cares? It's the Toros at Hi Corbett. Details here.

If baseball isn't your thing, you should head over to the Loft Cinema to check out Bad Bugs Bunny, a collection of scandalous Bugs Bunny cartoons from the ’30s and ’40s. Here's the Loft's description:


Get ready for the unvarnished truth about the dark side of American history as revealed in fabulous, vintage Warner Brothers cartoons at the hilarious program BAD BUGS BUNNY: THE DARK SIDE OF WARNER BROTHERS. This scandalously entertaining, educational and eye-opening 16mm film program features rarely seen cartoons from the 1930s and '40s, exploring sexism, racism and violence as filtered through the satirical antics of beloved Warner Bros. characters like Bugs Bunny and others. Censored by the studio and long-since pulled out of circulation, these cinematic curiosities offer a surprising (and sometimes shocking) glimpse into our recent past, a time when racial stereotypes, harsh violence and gender inequality ran rampant in “children’s cartoons, ” reflecting a much different, pre-PC American popular culture. Many of the shorts also include the quirky, jazzy orchestration by the genius of offbeat sound scores, Carl Stalling.

Globe-trotting film curator and collector Dennis Nyback will appear live to put these cartoons into a historical perspective and discuss their hidden history and censorship by Warner Brothers. First shown at Seattle’s Pike Street Cinema in 1993, Nyback’s BAD BUGS BUNNY program (culled from the curator’s own massive 16 mm film collection) has traveled throughout the U.S. and Europe, playing to sold-out houses around the world.

And if you like a taste of both baseball and movies, consider checking out Sugar, now playing at The Loft. I saw it last night and have to agree with Arizona's best film critic, the award-winning James DiGiovanna, who wrote last week: "While it could have been a perfectly decent standard-order sports film, Sugar rises above its roots and produces a tense, engaging and ultimately fresh perspective on the genre."