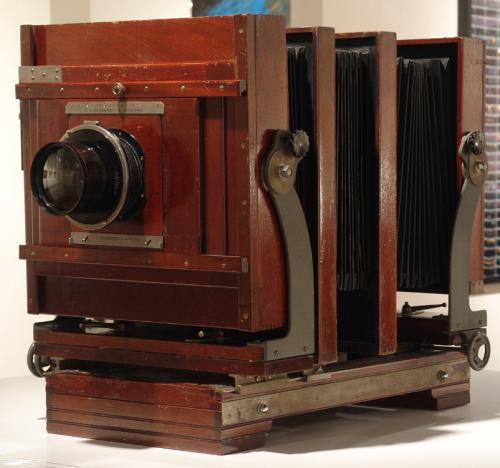 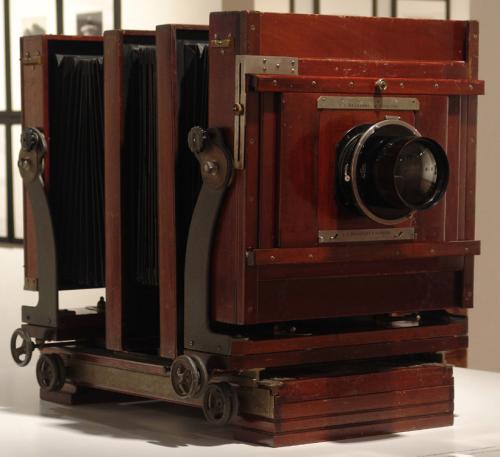 These are photographs of Lazlo Layton's Deardorff studio camera, which he used to shoot the work he's now showing at Etherton Gallery alongside works by Holly Roberts and Elizabeth Ernst. "Well Told Tales" continues through June 6.

Laszlo Layton restored this gorgeous mahogany Deardorff studio view camera (it has its own levels on the side!) that produces 11 x 14-inch negatives which he makes his contact prints from. He remembers seeing a collection of rare birds at the Arizona State Fair as a kid and actually tracked it down to the International Wildlife Museum here in Tucson to make the images we have on display.

One more photo, plus more details on the show, after the jump. 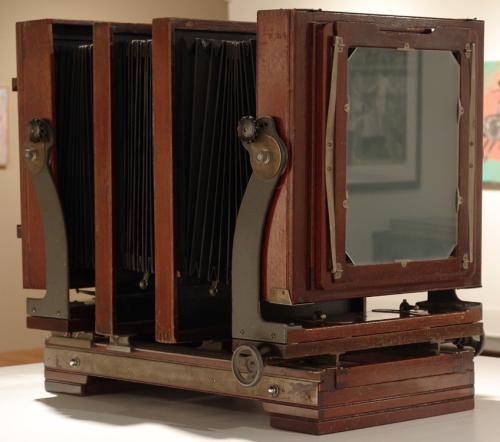 Here's the release on the show itself:

Laszlo Layton
Laszlo Layton’s Cabinets of Curiosity series comprises modern images that evoke 18th and 19th century natural history drawings. In images such as The Carmine Bee Eater, Layton first photographs a museum specimen and then makes a cyanotype print which he hand paints. Layton’s work makes obvious reference to naturalist John James Audubon and his majestic illustrations in Birds of America. However, his photographs owe as much to John Ruskin and the Arts and Crafts movement’s emphasis on naturalism and craftsmanship, as Audubon and seem remote from the precision and veracity to which photography lays claim. Although Layton’s work operates at the intersection of science and art, it is a call to beauty, not a diagram of reality.

Holly Roberts
Holly Roberts layers her paintings with photographs; working intuitively she builds up the surface and meaning of her work through photo-collage and deft use of paint. Unlike Layton, who blends photography and painting, she separates them, seeming to call attention to the unique properties of each. An example of her technique is Excavation in which a crying woman in a steam roller is headed for a collision with a dead bird, already lying face up on the ground. The vehicle and wheels are composed of a photograph of barren trees with a few birds perched in the upper branches, perhaps taken in winter. The wheels are paint laid down over the photograph. Their rough application makes the steam roller look Flinstonian, suggesting that our run away, pro-development policies are from the Pre-Cambrian age and ill suited to today’s pressing concerns about global warming.

Elizabeth Ernst
Elizabeth Ernst’s work is inspired by the trials experienced by her brother David, who was born with cerebral palsy in 1948 and often regarded as a freak. As she says, “The G. E. Circus is a world that I have created where everyone belongs, where the “freaks” and “outsiders” have a loving and caring community — a place where they are the norm.” Ernst sculpts small figures of circus freaks and other characters, placing them in settings like the Refreshment Stand. After photographing the mini-installations to create a narrative, she makes gelatin silver prints, which she subsequently paints and collages. In The Final Act, Ernst creates a demurely dressed woman sitting side saddle on an elephant who looks directly at the viewer, wearing a giant plumed headdress atop a sparkling orange cap, giving her a new voice. Ultimately she merges three distinct media — sculpture, photography and painting — into something utterly new, rescuing figures once relegated to the margins of society and retrieving their spiritual beauty.