Three Cheers for the UA Press 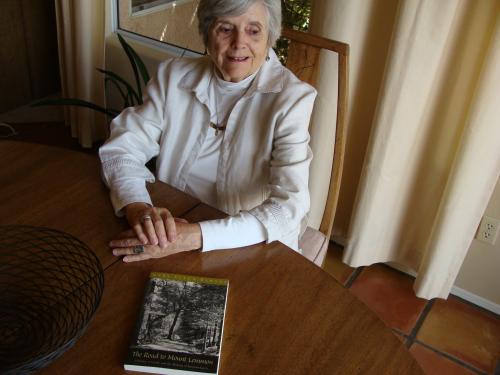 This week's cover story about the 50th Anniversary of the UA Press didn't have enough space to clue you in on a few events happening in town with authors and anniversary celebrations, too:

Mary Ellen Barnes, at left, author of The Road to Mount Lemmon: A Father, A Family and the Making of Summerhaven, will be at Antigone Books tomorrow (Friday, April 24) at 7 p.m. You can also catch her on Sunday, May 24, 2:30 p.m. at the Mount Lemmon Community Center, and Sunday, Nov. 8, 2 p.m. at the Tohono Chul Park.

Another UA Press author, John Alcock, author of When the Rains Come: A Naturalist’s Year in the Sonoran Desert, will be at Tohono Chul Park on Sunday, Oct. 4, 2 p.m.

There will be a party: Celebrate 50 Years of Excellence in Publishing—Anniversary Gala, on Wednesday, Nov. 4, 6 p.m. at the Arizona Inn.

For more info on other local events, go here.

The University of Arizona Libraries, Special Collections is also hosting an exhibit celebrating the 50th Anniversary through May 29, 2009. Five decades of UA Press titles are displayed, including a sample of George Webb’s handwritten manuscript of the Press’ first book, A Pima Remembers. It remains in print today.

Another fun UA Press fact: With almost 250,000 copies in print, English Words from Latin and Greek Elements is the Press’ best-selling book of all time and remains the standard for instruction in classical etymology.

From Holly Schaffer at the UA Press:


Since 2007, University of Arizona Press books have garnered 71 award citations, including the National Book Critics Circle Award for Juan Felipe Herrera’s "Half of the World in Light," the National Council on Public History Book Award for Chip Colwell-Chanthaphonh’s "Massacre at Camp Grant," and the PROSE Award (American Publishers Award for Professional and Scholarly Excellence) for Eugene Hunn’s "A Zapotec Natural History."

In 2007, University of Arizona Press books garnered 40 award citations, including the American Book Award for Ernestine Hayes’ "Blonde Indian," and the Southwest Books of the Year “Top Pick” for Richard Shelton’s "Crossing the Yard."

University of Arizona Press books are covered in more than 1,000 reviews and articles in top scholarly journals and major metropolitan newspapers.

On Twitter? So is the Press. Get their tweets at AZpress.

Catching Up with Photographer Tim Archibald