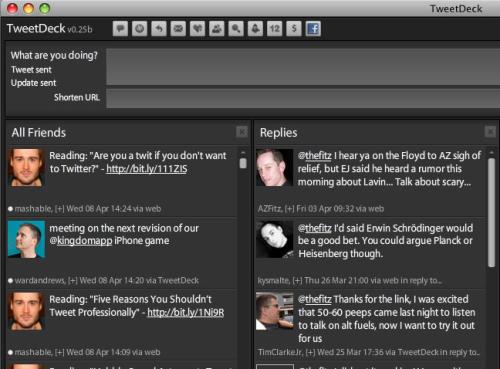 Sure, when it first launched at SXSW Interactive in 2007, I followed the unofficial geek handbook and immediately created an account. Until a month ago, my only posting was "on the phone, testing Twitter."

I mean, who cares what anyone else is doing or thinking? At last year's SXSW Interactive, my friend Ward just about drove me crazy updating his location to his friends every 10 minutes.

But, last month in Austin at this year's conference, I witnessed the evolution of the Twitter and its advanced use. I'm now a "tweetaholic" (find me @thefitz on Twitter).

It's not that the Twitter itself has changed - it still sports the same functionality as when it first launched. It's all the "twapplications" (Twitter applications) that have sprung up in the last year to sort, slice and dice the "twitterscape." Plus, the liberal Twitter elite (a.k.a. techno geeks) are now using all this random flotsam and jetsam of information for useful purposes - a far cry from the way your friendly neighborhood CNN, politicians and celebrities are stretching their Twitter wings.

* I went to SXSW Interactive this year to try and build my professional relationships for digital media consulting. Every time I sat down next to someone, I found myself Mac-blocked from making an introduction because the person was either sending a message to their "tweeps" (followers), reading other people's tweets, or updating Facebook. But I witnessed more than one spontaneous "tweetup" when people who had been following each other on Twitter suddenly realized they were in the same session and met in person for the first time. Genius: Find out whether you care about what someone has to say before you waste time talking to them in person.

* Thanks to the ingenious addition of hashtags (#tucson) and the ability to search by keyword, you find yourself connecting to people with similar interests you never knew before. A posting on my second day of tweeting - about how artificial intelligence algorithms are confused by "Napoleon Dynamite" and Dido recommendations - earned me an artificial intelligence engineer follower from Florida. My response to a tweet about science cafes picked up a follower with the National Museum of Health and Medicine at the Walter Reed Army Medical Center in D.C.

* At dinner with my girlfriend, her dad, and his friends, I found myself at a loss to remember the name of the father of quantum physics (I know, I know). To prove a point about a Twitter debate we were having, I sent out a tweet asking for the information. I had the answer - delivered by someone I didn't know - within 15 minutes. Not exactly Google, but not bad.