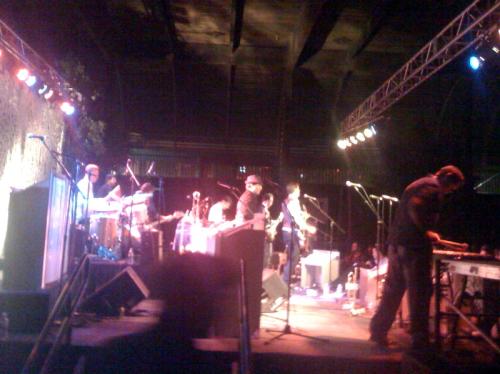 The Range got up to Phoenix this weekend for the launch of Calexico's Southwest mini-tour that will include a visit to the Coachella Festival in Indio, Calif., before wrapping up with a show at the Rialto here in downtown Tucson on Saturday, May 2.

The 1,200 or so fans that crowded into Heritage Square for the Calexico's first visit to our state capital in recent years got their money's worth during the nearly two-hour performance. The set featured a lot of material off the new album, Carried to Dust, with a smattering of classic Calexico numbers like "Across the Wire" and "Crystal Frontier," during which the band shifted into a few notes from the Clash's "Guns of Brixton."

As they typically do in the hometown shows, the band brought along many special guests. Salvador Duran played joined the band onstage to reprise his deep and rich vocals on "He Lays in the Reins," a tune from the collaboration between Calexico and Iron and Wine. Opening the show was Sergio Mendoza y La Orkestra, a large crew who clambered back onto a very crowded stage with Calexico for "Roka" and "Crumble." Through it all, John Convertino kept things steady on the drums while Joey Burns delighted in playing bandleader for his expansive crew. The only thing the Phoenix folks missed out on was a "Guero Canelo" jam at the end of the show.

Joey and John are taking the whole crew on the road again for a show a stop at the Orpheum Theater in Flagstaff on Saturday, April 11. If you're in the neighborhood, there are worse ways to spend a Saturday night in Northern Arizona.

Even Adolf Has Opinion on Livengood